You are here: Home» About » History

CMS Made Simple™ was first released in July 2004 as an open source (GPL) package, which it remains to this day. That separation of content, function, and design has been a key ethic from day one and it’s why so many of our users stop looking for further solutions once they have found us.

It’s not just our own user base that has given us such great support. CMS Made Simple has garnered a number of awards since its creation including runner up (twice) and winner of Pact Publishing’s ‘Best Overall Open Source Content Management System’ in their annual Open Source Awards.

Since 2004, the core system has been regularly improved and updated with features, security releases, code improvements and much more. In that time, we have released countless new versions, each an improvement on the previous. In the summer of 2015, we released version 2.0, which was a nearly complete overhaul of the system. As we noticed our user base maturing to more advanced developers creating sites and applications, and larger design firms producing hundreds of CMSMS projects, it helped steer the project towards the powerful application base it is today with the 2.3 branch.

CMSMS is developed by an international team of professionals who volunteer their time and efforts to design, develop, maintain, and market the system. In many cases this is in addition to running busy web and software development businesses themselves. Over the past years, many outstanding individuals have contributed their time and helped to shape the system that you can download today. You can find out more about the current Dev Team here, as well as what they can offer through their own professional services.

The Development Team meets officially once a month, but remains in contact daily, collaborating within a defined organisational structure. The Dev Team is always delighted to hear from individuals who feel they have the resources and time to get involved. If you think you may be one such person, click here to find out more.

You and CMS Made Simple

CMS Made Simple is available for you to download and use for free under the tenets of the GPL license. You can use it on commercial or personal projects and in many cases will be able to use the third party modules that have been developed (though you should check their individual licenses). If you have not already tried the demo or downloaded the core package, please do so. 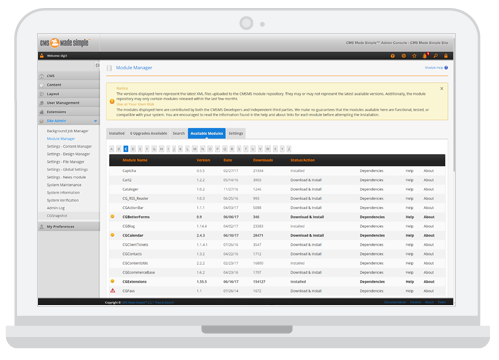